A Life of Rebellion 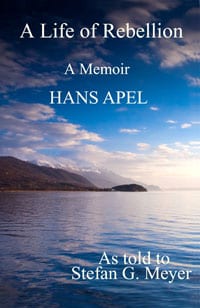 Hans Apel (1895-1989) was a German economist and younger brother of the musicologist Willi Apel. He studied at the University of Berlin and rose to become managing director of a Berlin-based company. In 1935 he left Germany and finally immigrated to the United States in 1937.

He earned a Ph.D. from Boston in 1945. From 1950 until his retirement in 1961, he was a full professor and chairman of the Department of Economics at the University of Bridgeport. He later returned to German and in pursuit of his research objectives, and traveled extensively in Eastern Europe during a period when travel restrictions on Westerners were strictly enforced.

Born and raised as a Jew in a highly anti-Semitic environment, he steadfastly refused to be affected by the hostility of the world around him. From early on, he rebelled against authority and chose to disregard accepted rules of propriety. He was a man of vision–an iconoclast who routinely took unpopular positions that went against the conventional thinking of his time. The life of rebellion that he lived was, in a sense, a truly spiritual life, because he rejected all attempts by others to define him.

This narrative, compiled from a series of taped interviews with his grandson in 1977, offers a compelling vision of the way that one can live a life of uncompromising principle and authenticity.

A Life of Rebellion is available on Amazon as a Kindle e-book and Paperback.

The Biography Famous
Scroll to top