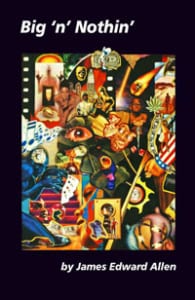 Big ‘n’ Nothin’ is the story of Pepper Hotwell, a professional gangster who specializes in armed robbery. Set in the ghetto of Gary, Indiana and Chicago’s south side in the late 1960s, his story is a raw, desperate, gun-slinging roll-of-the-dice fueled by drugs, sex, ambition, and pure will to survive. As he swashbuckles his way through a series of high profile heists, he demonstrates his willingness to follow his credo to its ultimate conclusion in his quest for the big score.

Pepper moves through a culture that oscillates between extremes of poverty and wealth. Money is made and lost in an instant. Self-indulgence competes with loyalty to family and loved ones. His story vividly depicts the lifestyle of people on the underbelly of society, using every means possible to claw their way to the top. Drug addiction, greed, and violence are shown naked and un-romanticized, yet the roots of Pepper’s risk-seeking attitude are also laid bare, lacing his self-aggrandizing trajectory with an implicit social critique.

The late James Edward Allen penned this fictionalized chronicle of his life and criminal escapades during an eleven-month lockdown in the Indiana State Prison, where he was serving a life sentence for murder. Allen was a rare breed, a career criminal with a code of ethics and a modus operandi that set him apart from ordinary street thugs and made him feared and respected by both his peers and law enforcement agents.

Allen grew up gifted in art and music, but found the flash of the streets more thrilling. During his final incarceration, he acquired a respectable measure of remorse. “I would rather live on beans in freedom than dine on prime rib if the side dish was more time behind the walls,” he said. The cover art is one of many collages he created in his prison cell, using a straight-edged razor, pictures clipped from discarded magazines, school paste, and water-based house paint.

Big ‘n’ Nothin’ is available through Amazon as a Kindle e-book and Paperback.

The Finest Story in the World

The Karma Seeker
Scroll to top