I Call the Wolves 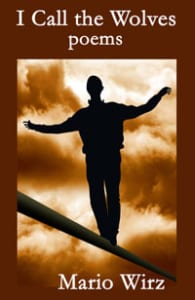 I Call the Wolves finds Mario Wirz wrestling with a problem of major proportions–the constant threat of death hanging over his shoulder. Death is his muse. It’s a shadow that hangs over all of us, but it’s the fate of some to feel it more keenly, to live with it minute-by-minute, hour-by-hour, and day-by-day. These poems hone in relentlessly on this topic, until one is inexorably affected by their stark, existential reality.

Wirz’s poems have been published in French, Italian, Ukrainian, Polish, Finnish, Greek, Hungarian, and Chinese, but it took ten years for his first novel to be published in English, and now the publication of this companion volume of poems is made possible only by recent changes in the publishing world—-the rise of e-books and desktop publishing—that have made it far easier and more cost–effective to publish literature in a minor key. But this volume, though small, is not minor. It’s poetry that speaks to all of us.

“Mario Wirz published poems, wrote and staged plays as early as the 1980s, but he became famous in the early 1990s when his book It’s Late, I Can’t Breathe – A Nocturnal Report was published. It told about a gay actor diagnosed HIV positive who found a language for fear and the desperate will to live. He was actually talking about himself. AIDS, therapy and the complications became his literary drive, and the background for stories and several volumes of poetry. For Mario Wirz, literature was a cure and a drug at the same time. ‘As long as I can write,’ he wrote, ‘death has no power over me.”

I Call the Woves is available in both paperback and Kindle editions at Amazon.com

Amazon Kindle Amazon.com
Back to Our Books

The Empty Cup: Poems Of My Youth
Scroll to top