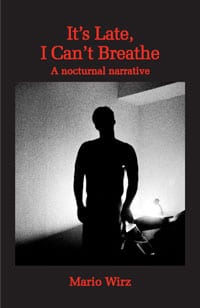 Mario, a 35-year-old gay actor, knows that he doesn’t have long to live. For five years, he has been surviving himself. For five years, the virus has schooled him in fear. Mario lies in the prison of his room and gives himself failing grades for his life—an F for his lack of success, and F for his pathological need for intimacy, and F for his neurotic lack of independence. Locked within him is resentment toward his mother, the lifelong yearning for a father, and a pimply-faced kid who cowers and refuses to grow up. Mario stumbles through the wilderness of men and waits for the call. He’s learned his lesson and endures the unendurable. In a unique, staccato style, Mario Wirz tells the desperate story of a man obsessed with his memories. For as long as he can hold out against the inevitable, he spins a feverish narrative that exposes his voracious will to live.

“Maybe my story is a rumor that this night is spreading like rat poison. Or an unlikely tale that someone has heard from someone else. Or a movie filled with unspeakable stereotypes on a late-late show…”

About the Translator, Alfred G. Meyer

The translator, Alfred G. Meyer (1920-1998), received his Ph.D. from Harvard University in 1950 and taught political science at the University of Michigan from 1966 to 1990. He was a noted authority on Marxism, Leninism, and the Soviet political system, and the author of a number of respected works in the fields of Russian and East European studies and communist political theory.

“A breathless and wild book…one which our cowboys should read.”
Susan Sontag

“This nocturnal narrative is disturbingly direct, sometimes moving, sometimes cynical. The brutal truth of its tale does not leave the reader unmoved.”
Detlef Grumbach, Radio Germany

“Mario Wirz shows himself in this book to be one of the most talented writers in the German language.”
Gottfried Wagner, Die Welt

“It would be nice if modern homosexuals were simply emancipated and self-aware, but it would be absurd to take this important concept in a fundamentalist manner and to mask all other realities like negativity and ambivalence only because they don’t fit in with our picture of ourselves.”
Mario Wirz

The Karma Seeker is available through Amazon as a Kindle e-book and Paperback. For a limited time, this book will be available for FREE on the Kindle (actual time to be announced).