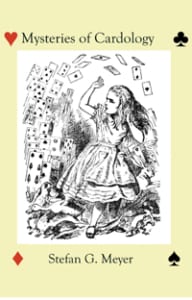 The Ancient Science of the Cards, also known as cardology or metasymbology, is a metaphysical system based on the ordinary deck of 52 cards familiar to all of us from such games as poker, bridge, and solitaire. Utilizing techniques similar to those found in astrology, numerology, and tarot, it can aid in analyzing people’s relationships with others, anticipating their obstacles and opportunities, and answering questions that may affect their decision-making in life.

Unlike astrology, which is grounded in observable phenomena (the movement of planets in the solar system relative to the Earth) the foundations of card science are shrouded in mystery. Everything about this system is mysterious, from the Deck of 52 itself, said to have originated as far back as Ancient Egypt or Atlantis, to the Birth Chart that assigns a specific card to each person according to their day of birth, to the ninety Age Spreads that are like a succession of game boards upon which each individual follows a prescribed path from one year to the next throughout the course of his or her lifetime.

Mysteries of Cardology in an account of the author’s personal attempt to delve into a subject that must surely be one of the most impervious to research that has ever existed. It raises broader questions, such as how do metaphysical systems like astrology, numerology and card science work? Do they simply allow the human mind to see what it wants to see, or so they each represent a key to an actual metaphysical structure embedded in human existence?

Much of the material presented will seem arcane and technical to the point of absurdity. But the very complexity of this subject is part of the story, and it’s not necessary to have a advanced understanding of the cards or even any familiarity with them whatsoever to understand and appreciate the author’s search for answers to his questions. Stefan Meyer has written this book as a personal narrative in order to avoid lapsing into the style of the very self-appointed authorities that he indirectly criticizes, and the result is a work of subtle self-investigation that is the mark of his writing style and attitude toward life.

Mysteries of Cardology is currently available only as a Kindle download on Amazon.com

Amazon Kindle
Back to Our Books page