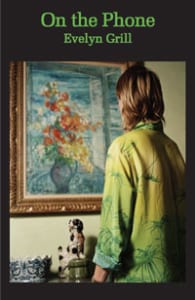 On the Phone review:

“Aloof, laconic, and full of irony, Elfriede Schweiger’s narrative causes a period of upheaval in her life to pass like a parade before the reader’s view.”

“On our 20th wedding anniversary my husband had invited me to an elegant dinner. We sat in the casino-restaurant by candlelight and had already ordered our meal. I had asked for filets of milk-fed lamb, he a wiener schnitzel. He raised his glass and instead of saying: “To our future happiness” he looked at me intently and said: “I’m taking this opportunity today to tell you that I’m planning to leave you. And so I’d like to drink with you to the years still lying ahead of us, and which we’ll be spending apart.” I felt that this could only be one of his bad jokes, and gave a somewhat forced laugh…”

A ghastly snippet in the life of 52-year-old Elfriede Schweiger—and an opportunity. The abandoned wife and mother of a full-grown son studies law and opens her own practice. The housewife is transformed into a career woman. But new men enter her life, and with them come new problems.

On the Phone is the journal of a woman in upheaval and transition. Evelyn Grill dissects the physical and spiritual sensitivities of this woman in the prime of life, recounting moments of hope, disappointment, love, self-doubt, and megalomania. When Evelyn Grill writes about people whose life is at a dead-end, she succeeds through her writing in finding them a route to freedom.

About the Translator, Renate Latimer

The translator, Renate Latimer, teaches at Auburn University. Her translations include the 400-page novel Odysseus and Penelope: An Ordinary Marriage by Inge Merkel and Memoirs from a Madhouse by Christine Lavant.

On The Phone is available as a Amazon Kindle e-book and Paperback.