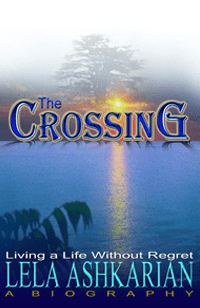 The Crossing tells the story of a self-made woman who immigrates to the United States from Lebanon and takes control of her own future.

I met Lela in a self-development study group in 2006. Since then, I have talked to her almost every week. From the very first call, her voice was clear and calm. I recognized “something” in her personality. Soon I identified the core, the fountainhead of this “something.”

Even as a boy, I admired the Norwegian pioneers, many thousands of them, moving toward the promise of America, launching a new life without any warranty of success, and conquering the environment and external obstacles. They originated the land of the self-made man.

Once upon a time, in a place far from Norway, another people lived a harsh life. In this place, the Bekaa Valley, there lived a special, strong-willed girl. Like the Norwegian pioneers, she did not believe in poverty and illiteracy. She willingly put herself in danger, taking risks in search of opportunities in a strange land. She took control of her future, of her life. She fought not so much with the environment, but with herself, chiseling the self-made woman, continuously moving forward with full force to see the light.

Listen: don’t make the mistake of confusing this story with Internet guru stories created for the purpose of marketing. Lela Ashkarian tells a unique story, one of a real heroine driven by a power, the source of which in the beginning I recognized as “something.”

The Crossing is available as a Amazon Kindle e-book and Paperback.

Mysteries of Cardology
Scroll to top