The End of Judaism 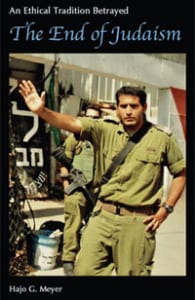 In The End of Judaism, Auschwitz survivor Hajo G. Meyer, a Dutch national of German-Jewish origin, expresses in impassioned terms his disgust at what he sees as the moral collapse of contemporary Israeli society and the worldwide Jewish community as a whole. Meyer is a member of “A Different Jewish Voice,” a Dutch-based, secular Jewish movement that dares to openly criticize Israel’s policies toward the Palestinians.

In his observations, deeply colored by his personal experiences during the Holocaust, Meyer compares Israel’s current policies with the early stages of the Nazis’ persecution of the German Jews. He clearly explains that he is in no way seeking to draw a parallel between the current policies of Israel and the Nazis’ endgame, which resulted in the mass murder of six million innocent people. What he is trying to do is simply point out the slippery slope that eventually led to this catastrophe, and the necessity of foreseeing the possible consequences of a policy that oppresses and marginalizes the Palestinians in their own homeland.

As a result of his experiences in Auschwitz, Hajo Meyer claims to have learned one fundamental lesson: that his moral duty as a human being was to never become like his oppressors. The End of Judaism is the outcry of a dissident Jew who is not afraid of standing up to entrenched ways of thinking about history, and particularly about the Palestinian conflict which is one of the most intractable social and political problems in the world today.

The End of Judaism is available as an Amazon Kindle e-book and Paperback.

The Finest Story in the World
Scroll to top