The Years of the Klan Doctors 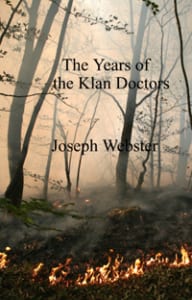 The Years of the Klan Doctors: synopsis

The principal author’s paranoia is painfully obvious throughout his narrative, which covers the last five years of a twelve-year prison term. He believes in a vast conspiracy organized by the Ku Klux Klan, and imagines himself as a chief target of this conspiracy. His evidence for this is based entirely on dreams, visions, and reading material that he interprets to fit his delusions. Moreover, he is his own worst enemy, ignoring the warnings that he receives in his own dreams, and pursuing endless legal complaints that are inevitably rebuffed by the penal system bureaucracy and only serve to put him more at odds with the powers arrayed against him.

It occurs to me that this incoherent voice rescued from that sea of oblivion might awaken us to the urgency of a plight that is not only his, but all of ours, that it might indict us and our entire society, as surely as if we were in a court of law, as co-conspirators in silence, in apathy, and in ignorance concerning the nature of our penal system, and that in doing so that it might prove, in fact, to be very powerful indeed.

The Fantasist
Scroll to top